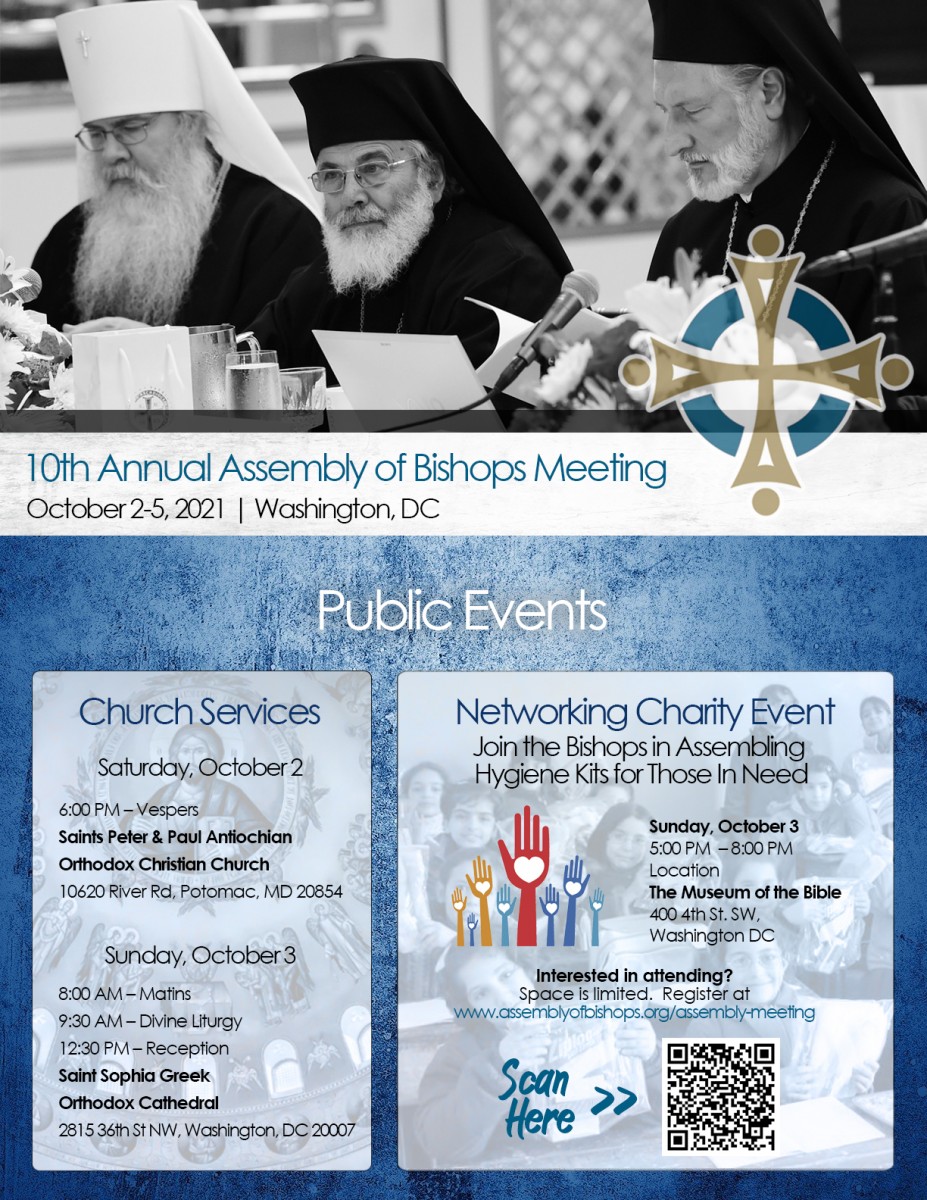 NEW YORK – The Assembly of Canonical Orthodox Bishops of the United States of America announced that its 10th Annual Assembly of Bishops Meeting will be held October 2-5, 2021 in Washington D.C.  The Assembly will also be hosting a charity networking event to hear the voices of the youth and young adults while assembling hygiene kits for those in need.  The event will kick-off at 5:00 PM EDT on Sunday, October 3, 2021 and will be open to the public.

The Assembly of Bishops is made up of all the active, canonical Orthodox bishops in the United States of America, of every jurisdiction.  For the last decade, members of the Assembly have gathered annually to discuss and decide important matters affecting the life, growth, and unity of the Orthodox Church, its ministries, finances, and philanthropic concerns. This year’s agenda will feature proposals to introduce new channels to connect with the Orthodox faithful and several new ministries and committees to support Orthodox youth and volunteer programs.

Reflecting on the upcoming meeting, Archbishop Elpidophoros, Chair of the Assembly, stated, “After a year and a half of painful separation, we look forward to gathering in person with all of our brother hierarchs in this country. We are especially eager to worship together with all the local faithful. This year, our main focus is the youth. And continuing our 'year of the youth' activities, in constant dialogue with youth and young adults, we want to answer together the Lord’s call to serve those in need (Mat 25:31-46). Therefore, we invite all of those who are able to assemble care kits to be distributed by the International Orthodox Christian Charities, one of the Assembly agencies. We sincerely hope you will join us, your spiritual fathers, during our 10th Anniversary celebration."

The Hierarchs will arrive on Saturday, October 2nd for Vespers beginning at 6:00 PM at Saints Peter & Paul Antiochian Orthodox Christian Church in Potomac, MD. They will then host a private reception for the local clergy and their families. The official opening of the Assembly will take place on Sunday morning, October 3rd, where the jurisdictional heads will concelebrate the Divine Liturgy at Saint Sophia Greek Orthodox Cathedral in Washington, D.C.  A reception will follow in the Cathedral’s banquet facilities.

Anyone who would like to participate in the Church services, receptions, and charity networking event with the Hierarchs are asked to register by September 18th.  Register here.

The Assembly of Bishops, comprised of all the active, canonical Orthodox Bishops of every jurisdiction in the United States of America, is the primary and official forum for Orthodox Christian Unity in the United States of America. Its purpose is to preserve and contribute to the unity of the Orthodox Church by helping to further her spiritual, theological, ecclesiological, canonical, educational, missionary, and philanthropic aims.

Assembly of Bishops Joins Other Christians in Filing Amicus Brief in Major Abortion Case before the U.S. Supreme Court

Members of the Assembly of Bishops Participate in Religious Freedom Summit in Washington D.C.