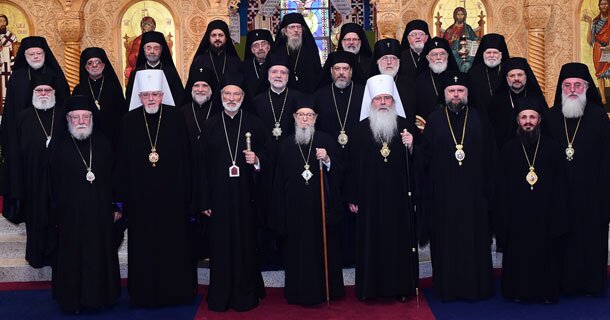 The Assembly of Canonical Orthodox Bishops of the United States of America convened in Cleveland, Ohio today for the second day of its ninth annual meeting.

During the morning session, the Hierarchs discussed ways to support cross-jurisdictional cooperation among parishes at the local level. The Hierarchs issued the following statement in that regard:

“The Assembly of Canonical Orthodox Bishops of the United States of America is committed to encouraging spiritual unity, communication, and cooperation among the parishes of various jurisdictions situated in the same geographic areas. The work of local clergy brotherhoods is a critical part of this process of achieving greater unity. In particular, the Assembly encourages all parishes to engage in joint liturgical events, educational activities, and outreach ministries, with respective hierarchical blessings.”

The Hierarchs endorsed the upcoming Orthodox Camping and Youth Worker Conference to be held January 23-26, 2019 at the Antiochian Village. His Eminence Metropolitan Gregory of Nyssa, Secretary of the Assembly, strongly encouraged the participation of youth workers in the conference.

In the afternoon session, the Hierarchs discussed an assessment of the Assembly’s accomplishments and challenges over the first nine years and began to identify some specific future objectives and priorities to achieve over the next several years. The Hierarchs reaffirmed their commitment to the mission of the Assembly and their desire to reinvigorate its work.