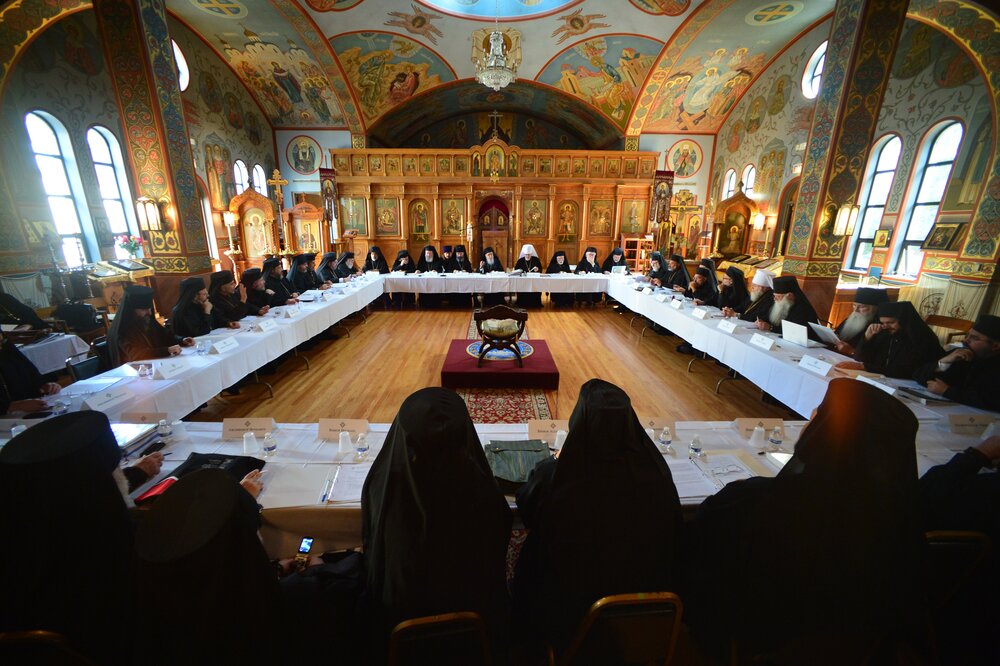 In the statement on marriage, the Assembly expresses its deep concern over recent actions concerning the status of marriage, in particular the legalization of same-sex unions. It goes on to read, in part:

The Orthodox Christian teaching on marriage and sexuality, firmly grounded in Holy Scripture, two millennia of Church Tradition, and Canon Law, holds that the sacrament of marriage consists in the union of a man and a woman, and that authentic marriage reflects the sacred unity that exists between Christ and His Bride, the Church.

The full statement on marriage can be read here.

Our Assembly repudiates any and all attacks on human beings, irrespective of race and religion, by means of violence, kidnapping, torture and killing. Moreover, we deplore the destruction of all places of worship. We are especially disheartened at the inexcusable indifference and unjustifiable inaction of authorities, which have failed to protect the Christian population and the broader public in these regions.

The full statement on violence in the Middle East can be read here.

The Assembly’s message to the faithful offers a summary of the proceedings and shares the spirit of fraternal love in which the meeting was held:

Forty-three Hierarchs convened in the unity of our holy Orthodox faith, mindful of our responsibility to each other and to the whole Church as the Body of Christ. We recognize our responsibility to “do all things decently and in order” as our foremost duty towards His holy Church and the people of Christ, especially the youth. We belong to the Church, which believes in and manifests the grace of the Triune God and the power of our Lord’s passion and resurrection…Throughout the meeting, we had a candid and fraternal evaluation of achievement hitherto and work that remains outstanding in our ministry as Orthodox in this region, observing that, despite the geographical expanse of our regional assembly, we are nevertheless bridged by our love for God.

The full message to the faithful can be read here.

This year’s priority discussions included the vision of the Assembly and interpretation of the Chambésy decision and canonical restructuring of the Church in America. The Assembly reviewed a model for canonical restructuring that was presented by the Committee for Canonical Regional Planning under the leadership of Archbishop Nicolae. The model was a further development of one put forth at last year’s Assembly meeting. The hierarchs engaged in a lengthy discussion and provided comments. Based on the feedback, the committee will continue the process of developing a model that will garner the consensus of the hierarchs. As an immediate step, the committee’s membership will be expanded to represent the viewpoints of every jurisdiction.

It was acknowledged that the unique history and experiences of each jurisdiction in the US results today in a range of responses to ecclesiastical unity. In particular, one of the points of discussion was the pastoral care of recent Orthodox immigrants and the need for any future action to consider the needs of these communities.

Additional outcomes of the annual meeting included the Assembly giving its blessing to the Committee for Youth to plan for a national gathering of high school students. The gathering would enable Orthodox youth from all jurisdictions to come together, share in their faith, bear witness to the Church, and build bridges across our Orthodox family. The gathering, which would be organized by jurisdictional youth departments, is envisioned for 2016 or 2017.

Before adjourning on the final day, the Assembly voted unanimously to re-elect Bishop Basil as secretary and Metropolitan Antony as treasurer. Archbishop Demetrios recognized and commended them for their devotion to the Assembly over the past three years. The Assembly also reviewed and approved the 2014 budget.

The hierarchs concluded the meeting by singing the Apolytikion of Pentecost: Blessed art Thou, O Christ our God, Who hast shown forth the fishermen as supremely wise by sending down upon them the Holy Spirit, and through them didst draw the world into Thy net. O Befriender of man, glory be to Thee.

The Assembly expects to hold its next meeting in September 2014.