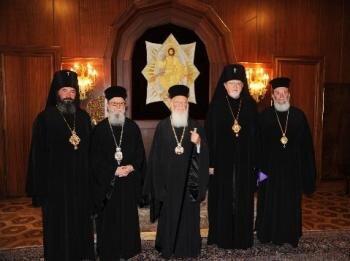 Following the greeting and paternal exhortation of His All Holiness (see Patriarchal Greeting), the officers engaged the Ecumenical Patriarch in a full and robust discussion of the work and prospects of the Assembly. Of particular note during the discussion, was the emphasis that His All Holiness put on the Committee structure and function, and his encouragement to commence the Committee work as soon as possible. He also noted both the size and the diversity of the Assembly.

Following the two-hour meeting, His All Holiness hosted the Hierarchs in the Patriarchal Trapeza, together with Hierarchs of the Ecumenical Throne. Following the meal, the Patriarchate arranged for the Officers to visit the famous Churches of Chora and Agia Sophia, before being hosted again in the evening by His All Holiness for a farewell dinner. Archbishop Demetrios returned to the United States on Wednesday, Sept. 23.