Orthodox-Catholic Dialogue Meets, Issues Statement on Plight of Christians in the Middle East

Wednesday, November 09, 2011
The North American Orthodox-Catholic Theological Consultation held its 81st meeting at St Paul?s College in Washington October 27-28. ... During this meeting the members heard reports about major events in the lives of the Catholic and Orthodox Churches and issued a brief statement, "On the Plight of Churches in the Middle East." read more »

Thursday, October 13, 2011
Please visit the Bishops' Directory, which has now been updated to include photos of all of the bishops in the United States. To see a larger version of the photo of any bishop, just click on the photo. To learn something about a bishop, please clink on the "Biography" link (where available). read more »

A New Member of the Assembly

Monday, September 26, 2011
With the blessing of His Holiness Maxim of the Bulgarian Orthodox Church - Bulgarian Patriarchate and according to the decision of the Holy Synod, Bishop Daniil (Trendafilov Nikolov) of Dragovitsa has arrived in New York City to take up the position of Vicar to Metropolitan Joseph of the Bulgarian Eastern Orthodox Diocese of the USA, Canada and Australia. His Grace was born on March 2nd, 1972. read more »

Monday, September 12, 2011
The Most Reverend Dmitri, retired Archbishop of Dallas and the Diocese of the South (OCA), reposed at his home on Sunday, August 28th at the age of 87. May his memory be eternal! The Holy and Sacred Synod of the Ecumenical Patriarchate, at its meeting on August 29th/30th, accepted the resignation of The Most Reverend Maximos, 76, from his position as Metropolitan of Pittsburgh (GOA). Eis polla eti, despota! read more »

Wednesday, June 29, 2011
The Atlas provides a "snapshot" of the Orthodox Christian Churches in the United States. It is addressed for the wide - Orthodox and non-Orthodox, academic and non-academic - audiences. Simultaneously, this book is an atlas, a reference book and a thematic monograph. It is an atlas because it contains numerous maps to show the historical development and present territorial patterns of Orthodox Church life in America. It is a reference book because it furnishes comprehensive information and statistical data on all American Orthodox Christian Churches. It is a thematic monograph because the essays in this book tell the story of the Orthodox Christian past and present in the United States. read more »

Monday, June 27, 2011
The Terms of Reference for each of the Assembly's thirteen committees are now posted on the website. These documents outline the specific goals of each committee, and the means to achieve those goals; they are meant to be a guiding document for the committee members. Listed along with them are the committee descriptions, committee membership, and its recommended consultants. read more »

Patriarch Irinej's Letter to the Assembly

Friday, June 17, 2011
This letter was written to the Chairman of the Assembly by Patriarch Irinej of Serbia, to explain the unfortunate absence of the Serbian bishops from the meeting in Chicago; it was presented to all the members of the Assembly. Regrettably, the Serbian bishops were not able to make even the second day, as the Patriarch had hoped, due to difficulties in travel over Europe. read more »

The Feast of Pentecost 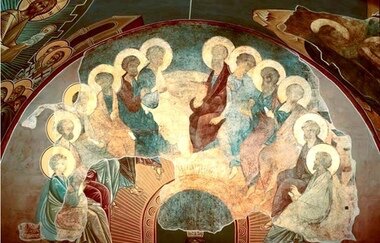 Friday, June 10, 2011
"When the day of Pentecost was fully come, they were all with one accord in one place. And suddenly there came a sound from heaven as of a rushing mighty wind, and it filled all the house where they were sitting. And there appeared unto them cloven tongues like as of fire, and it sat upon each of them. And they were all filled with the Holy Spirit." - The Acts of the Apostles read more »

Thursday, April 07, 2011
The annual Convocation of the Orthodox Christian Prison Ministry (OCPM) will be held at the Sheraton Centre Downtown Toronto June 28 - July 2, 2011. This year's Convocation will bring together the many Orthodox clergy and laity from around the world who are participating in, or interested in initiating, prison ministry. The gathering will provide ample time for education, fellowship, encouragement, communal worship and the free exchange of ideas. read more »