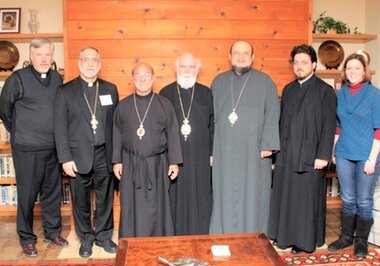 Tuesday, January 31, 2012
The Committee for Youth of the Assembly of Canonical Orthodox Bishops of North and Central America held its semi-annual meeting on January 24th and 25th, 2012. The meeting convened at the Antiochian Village Heritage and Learning Center, Bolivar, PA, in conjunction with the Committee for Youth read more » 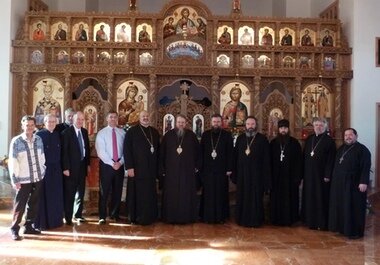 Tuesday, January 31, 2012
The Assembly of Canonical Orthodox Bishops' Committee on Canonical Regional Planning met in-person on Friday, January 27, 2012, at the headquarters of the Romanian Orthodox Archdiocese in Chicago, Illinois, hosted by Archbishop Nicolae, Chairman of the Committee. read more » 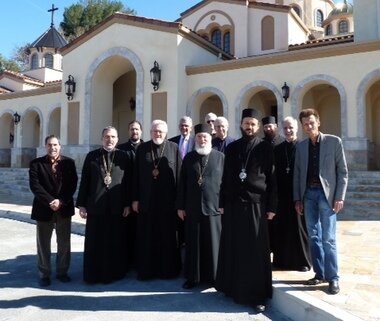 Thursday, January 26, 2012
The Secretariat of the Assembly of Canonical Orthodox Bishops of North and Central America held its annual "face-to-face" meeting, January 24th and 25th, 2012. The hosts for this year's "face-to-face" meeting were Father Josiah Trenham and the congregation of St Andrew Church in Riverside, CA. An overview of the work accomplished at the Riverside meeting will be included in a soon-to-be issued media release which will report to the Church-at-large on the work of the Assembly during the past year. read more »

We Are Asking For Your Help

Wednesday, January 04, 2012
The Assembly of Canonical Orthodox Bishops is a conference comprised of all active bishops of North and Central America, of every jurisdiction. Its purpose is to preserve and contribute to the unity of the Orthodox Church by helping to further her spiritual, theological, ecclesiological, canonical, educational, missionary and philanthropic aims. Please consider supporting the Assembly read more »

Monday, December 19, 2011
Five new bishops have recently been consecrated for the Church in North America and have joined the Assembly of Bishops of North and Central America: read more »

Wednesday, November 16, 2011
This historic gathering will be held Wednesday January 25 to Saturday January 28, 2012 at the Antiochian Village Conference Center in Bolivar, Pennsylvania, and will be hosted by the Departments of Youth Ministry and of Camping of the Antiochian Archdiocese. read more »

Orthodox-Catholic Dialogue Meets, Issues Statement on Plight of Christians in the Middle East

Wednesday, November 09, 2011
The North American Orthodox-Catholic Theological Consultation held its 81st meeting at St Paul?s College in Washington October 27-28. ... During this meeting the members heard reports about major events in the lives of the Catholic and Orthodox Churches and issued a brief statement, "On the Plight of Churches in the Middle East." read more »

Thursday, October 13, 2011
Please visit the Bishops' Directory, which has now been updated to include photos of all of the bishops in the United States. To see a larger version of the photo of any bishop, just click on the photo. To learn something about a bishop, please clink on the "Biography" link (where available). read more »

A New Member of the Assembly

Monday, September 26, 2011
With the blessing of His Holiness Maxim of the Bulgarian Orthodox Church - Bulgarian Patriarchate and according to the decision of the Holy Synod, Bishop Daniil (Trendafilov Nikolov) of Dragovitsa has arrived in New York City to take up the position of Vicar to Metropolitan Joseph of the Bulgarian Eastern Orthodox Diocese of the USA, Canada and Australia. His Grace was born on March 2nd, 1972. read more »