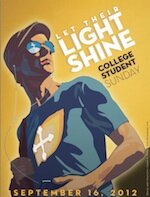 Thursday, September 06, 2012
The leadership of Orthodox Christian Fellowship has released the following letter in recognition of this month's College Student Sunday. read more » 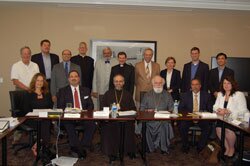 Wednesday, June 20, 2012
The Eighty-Second meeting of the North American Orthodox-Catholic Theological Consultation took place at Hellenic College/Holy Cross Greek Orthodox School of Theology in Brookline, Massachusetts, from June 5 to 7. The members of the Consultation continued their study of the role of the laity in their churches. read more » 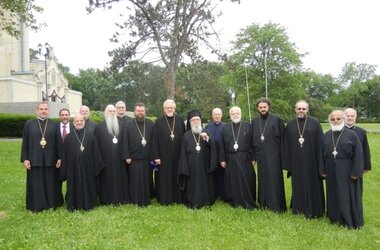 News from the Committees

Monday, May 21, 2012
It is with a profound depth of sadness that we hereby inform you of the repose, in the morning of 21 May, 2012 in the 76th year of his earthly pilgrimage, of His Beatitude Metropolitan Constantine, the Ruling Hierarch of the Central Eparchy and the Primate of our Ukrainian Orthodox Church of the USA. read more »

Marriage and the Moral Crisis in our Nation

Wednesday, May 16, 2012
Recently, the public discussion about marriage and about the propriety of its redefinition has once again become prominent. It is a discussion that is certain to continue for a long time yet. In light of this, the Assembly reaffirms the ancient and unchanging teaching of the Church and invites the faithful to read the important statement below, issued by SCOBA in 2003 and as relevant and binding today as when first published. read more »

Committee Chairmen to Meet in May

Tuesday, May 08, 2012
Since much of the work of the Assembly of Bishops falls within the purview of its thirteen committees, the success of these committees is essential for the success of the Assembly as a whole. Therefore, the Secretariat?s Coordinator for Committees, Bishop Maxim, is organizing a face-to-face meeting of the Assembly?s thirteen committee chairmen, scheduled to meet on May 30. The chairmen will gather for the day at the Metropolia Center of the Ukrainian Orthodox Church of the USA, where they will be hosted by Archbishop Antony, who currently serves as the Assembly?s Treasurer and the chairman of the Committee for Financial Affairs. read more »

Tuesday, May 08, 2012
A new bishop was consecrated this past Saturday, May 5th, and joins the Assembly: Bishop Alexander (Golitzin), who was made the bishop of Toledo and the Bulgarian Diocese of the Orthodox Church in America. read more »

Prison Ministry Awareness Sunday is May 20

Thursday, May 03, 2012
We, the Hierarchs of the Assembly of Bishops, are by the grace of God blessed to designate the Sixth Sunday of Pascha, which this year falls on May 20, as Prison Ministry Awareness Sunday. We embrace the diakonia of prison ministry in keeping with the example of our Risen Lord Jesus Christ, Who in His earthly ministry preached His message of love and forgiveness to all sinners, even consorting with publicans and harlots, and saying that when we visit people who are in prison, we are visiting Him (Matthew 25:36). read more »