The Feast of the Ascension

Thursday, June 02, 2011
On this great feast of the glorious Ascension into heaven of the God-Man, our Lord and Saviour Jesus Christ, we send our paternal blessings and prayerful best wishes for very happy feast to the Reverend Priests, the Deacons in Christ, the Monastics, and all pious and Christ-loving Orthodox Faithful. read more » 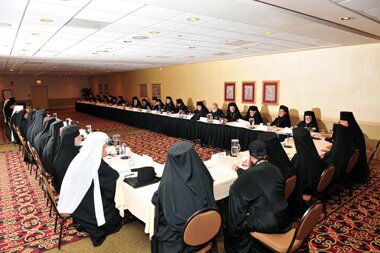 Friday, May 27, 2011
From May 25-27, the second annual Assembly of Canonical Orthodox Bishops of North and Central America gathered for its meeting at the Chicago O'Hare Hilton. There was a total of 45 bishops in attendance. read more »

2011 Message of the Assembly of Bishops

Friday, May 27, 2011
Christ is Risen! "Glory to the Holy, Consubstantial, Life-giving, and Undivided Trinity." By the grace of God, we forty-five Hierarchs gathered in Chicago IL, on May 25-27, 2011, for the second meeting of the Assembly of Canonical Orthodox Bishops of North and Central America. read more »

Tuesday, May 17, 2011
Beginning on the Leavetaking of the feast of Mid-Pentecost, Wednesday, May 25th and continuing through Friday, May 27th we members of the Assembly of Canonical Orthodox Bishops of North and Central America will gather in Chicago to pray and work together, doing our part in building up the Holy Church in this land to the glory of God and the salvation of souls. Among things to be discussed during the sessions in Chicago will be the work of our Assembly's thirteen committees, its Secretariat, and the fourteen agencies and endorsed-organizations. The prayers of all our Christ-loving clergy, monastics and lay people are earnestly requested, that the same Spirit Whom our Saviour poured forth as Living Water to sate the thirst of His Holy Disciples might inspire us as we labor for His glory. read more »

Sunday, April 24, 2011
Christ is risen! On this radiant and sublime feast the sorrow of the disciples of our Lord was turned to astonishment and joy. Those whose world had seemingly come to an horrific end, found that their world had, in fact, begun anew and with splendor. The great enemies of the human race: death, sin, the devil and his twisted cohorts, lay collectively defeated, mauled and ruined in the tomb. Hades laments at its loss. No more was sin to tyrannize us. No more was the uncertainty of death to hang around our necks like a mighty millstone bending the human race down to the ground. read more »

Thursday, April 07, 2011
The annual Convocation of the Orthodox Christian Prison Ministry (OCPM) will be held at the Sheraton Centre Downtown Toronto June 28 - July 2, 2011. This year's Convocation will bring together the many Orthodox clergy and laity from around the world who are participating in, or interested in initiating, prison ministry. The gathering will provide ample time for education, fellowship, encouragement, communal worship and the free exchange of ideas. read more »

Great Feast of the Annunciation 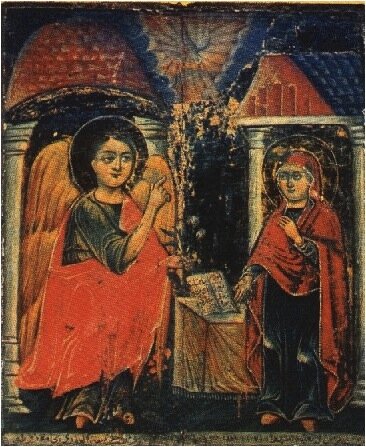 Thursday, March 24, 2011
The Holy Spirit has come upon the most pure Maiden, and the Son of God has become incarnate. We bow before the mystery which, in the words of St. Gregory Palamas, is "believed not known, worshipped not investigated." read more »

Wednesday, March 23, 2011
On March 13, the first Sunday of Great Lent, bishops, priests, deacons, and laity all over the nation gathered to celebrate the Triumph of Holy Orthodoxy. For photos of various celebrations around the country, please see the following links: read more »

Monday, March 21, 2011
With the addition of the parish communities of the Patriarchate of Georgia resident in the United States, the Directory of Parishes used by the Assembly of Bishops now includes all of the parishes of the twelve jurisdictions which participate in the Assembly. read more »

Interview with Fr. Mark Arey About the Assembly of Bishops

Monday, March 21, 2011
Orthodox Christian Network (OCN) recently conducted an interview with Fr. Mark Arey, the executive secretary to the Chairman of the Assembly, discussing, among other things, the progress of the Assembly's work. read more »

The Repose of Metropolitan Nicholas

Thursday, March 17, 2011
On Sunday, March 13th, exactly twenty-eight years to the day after his consecration to the sacred episcopacy, Metropolitan Nicholas, primate of the Carpatho-Russian Orthodox Diocese of the USA, fell asleep in the Lord. For information about the Metropolitan, his last days, and the funeral arrangements, please see the website of the Carpatho-Russian diocese. read more »

Monday, March 14, 2011
In the wake of the recent earthquake and tsunami in Japan, and the terrible devastation and loss of life resulting, the Assembly of Bishops encourages the faithful of North America to pray earnestly for Metropolitan Daniel of Tokyo, Bishop Seraphim of Sendai, and all the clergy and faithful of the autonomous Orthodox Church of Japan. read more »

Report on the Pre-Conciliar Council in Chambesy

Monday, March 14, 2011
The Inter-Orthodox Preparatory Commission, which is working to prepare for the planned Great and Holy Synod, and which is made up of representatives of fourteen autocephalous Orthodox churches, met from 21-26 February in Chambesy, Switzerland. It was this Commission that, in 2009, chartered the Assembly of Bishops of North and Central America. At this latest meeting, they were scheduled to address the issues of the order of Diptychs and the procedures for granting autocephaly to dependent churches. read more »

Appointment of Communications Consultants for the Assembly of Bishops

Monday, March 14, 2011
Following its approval by the Chairman of the Assembly, the Secretariat has formed a Program for Communications, and with it, a body of consultants who will help the Secretary to communicate the work of the Assembly and the message of the Orthodox Church to the faithful in North America, to the media when necessary, and to the wider public. They will also assist the Assembly of Bishops at large in preparing official statements, position papers, and press releases. read more »

Sunday, March 06, 2011
Let us set out with joy upon the season of the Fast, and prepare ourselves for spiritual combat. Let us purify our soul and cleanse our flesh; and as we fast from food, let us abstain also from every passion. Rejoicing in the virtues of the Spirit may we persevere with love, and so be counted worthy to see the solemn Passion of Christ our God, and with great spiritual gladness to behold His holy Passover. read more »

Tuesday, March 01, 2011
This past week the Chairman of the Assembly of Bishops, Archbishop Demetrios, sent out a formal notification to all the member bishops for the next plenary session of the Assembly. The first meeting was held in New York; this meeting will be held in Chicago, and will convene on May 25-27, 2011. The Chairman encouraged each committee to begin its work, with the hope of having at least one meeting (via telephone, video conference, or in person) before the Assembly. It is also expected that time will be made available in Chicago for committees to meet, to allow them to prepare their reports to the Assembly. read more »

Tuesday, February 15, 2011
New directories have been created for the Assembly of Bishops. In addition to the initial Directories of the Bishops and of the Parishes, three new directories have been added: the Directories of Military Chaplains, of Male Monastic Communities and of Female Monastic Communities. In addition, the Parish Directory has been updated to now include the parishes of the Moscow Patriarchate in the U.S. read more »

Tuesday, February 08, 2011
The membership of the thirteen committees of the Assembly of Bishops, including the chairmen of each committee, has been finalized, and is now available. These members, under the coordination of their chairmen, will initially be responsible for addressing the tasks listed under the Committee Descriptions. It is hoped that each committee will be able to meet at least once in advance of the forthcoming meeting of all the bishops in May. read more »

Assembly Delegation to Participate in March for Life in Nation's Capital